What is the Most Ethical Dehorning Method?

“Ethical” is a word tossed around a lot lately in the animal welfare debate. According to the Merriam-Webster Dictionary, ethical can be defined as, “relating to ethics [the discipline of dealing with what is good or bad]”, “involving or expressing moral approval or disapproval” and “conforming to accepted standards of conduct”.

Let’s start with the issue of dehorning as “good” or “bad”. Some say “bad”, because it’s painful for the animal. However, vaccination is also a painful procedure. Few would argue that vaccination is “bad”, because it ultimately confers the benefit of disease prevention. Does not dehorning also confer the benefit of preventing injuries from horned herd-mates? According to the American Veterinary Medical Association, dehorned cattle are less likely to suffer bruising, inflict injury to the udders, flanks or eyes of other cattle, or injure horses, dogs and handlers.1 Ultimately, dehorning benefits not only the animal that undergoes the procedure, but also all the other animals and humans it encounters throughout its life.

The issue, then, comes down to the ethics of the dehorning method itself. There are several ways to dehorn cattle, ranging from caustic paste disbudding in young calves to hand saw dehorning in mature animals. The pain inflicted on the animal, and the risk of injury posed by each of these methods, vary widely. Surveys tell us most dairy farmers use a hot-iron to disbud calves,2 while most cow-calf producers use Barnes or Guillotine dehorners.3 These methods would therefore seem to fit the definition of ethical as conforming to accepted standards of conduct. But just because a practice is widely accepted does not necessarily make it morally acceptable. And, accepted standards of conduct can change over time as we’re witnessing now in the animal welfare debate.

Is it ethical to dehorn animals with saws, tubes, knives, Barnes and other tools when other less painful, equally effective methods exist?

Is it ethical to perform dehorning – or any potentially painful animal management practices – without the use of pain relievers or sedatives?

What are your views of the ethics of dehorning?

Whenever I ask dairy or beef producers why they don’t use caustic paste to dehorn their animals, I tend to hear the same responses over and over. Here are the top five producer concerns – and my responses – when it comes to not using dehorning paste:

Now is the time to get ready. Now is the time to start exploring alternative, less invasive means of horn removal. Because, to paraphrase Charles Darwin, it’s not always the strongest who survive, but the ones most responsive to change.

What are your concerns about using caustic dehorning paste? 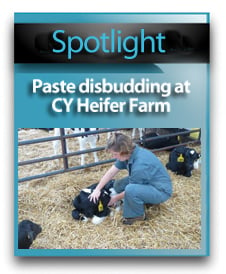 Dr. Villarroel says "... in my experience dehorning paste is actually the best [dehorning] method available. However, you need to pay attention to two things to make it work well: timing and housing." Her article includes a step-by-step paste dehorning process. Read the full article...